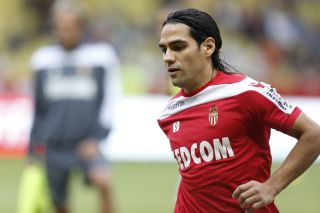 The Colombia international signed a five-year contract with Claudio Ranieri's side in May, bringing an end to his two-year stay at previous club Atletico Madrid.

However, rumours of a move back to the Spanish capital intensified on Tuesday when Real president Florentino Perez said the club could move for the 27-year-old at the end of the season.

But Falcao has asserted that he is not considering his future, and is enjoying his stint at the Stade Louis II.

"I can only thank Florentino Perez for what he's said," Falcao commented.

"But I must respect my current club Monaco, where I am feeling very well.

"I am very happy at Monaco. This is not the right time to talk about Real Madrid's potential interest in me out of respect for my current club."

Falcao has made an instant impact in France's top-flight, notching seven goals in nine appearances.

Monaco sit unbeaten at the summit of Ligue 1 having won six and drawn three of their league encounters thus far.