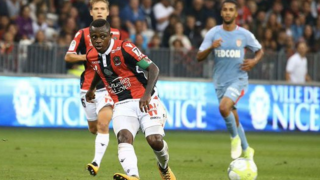 Lucien Favre has hailed Jean Michael Seri as "a wonderful player and man" after the Nice midfielder's proposed move to Barcelona broke down.

Seri, a key component of Nice's third-placed finish in Ligue 1 last term, had looked set to join the LaLiga giants towards the end of the transfer window, though the move failed to materialise.

And, after a combative display at the heart of Nice's midfield in the 4-0 thumping of champions Monaco on Saturday, Favre was quick to laud Seri's positive attitude.

"Seri is wonderful as a player and as a man, it's the same level," Favre told L'Equipe.

"He has always been very positive with us. But we do not need much to talk to each other.

"We understood each other from the beginning. It is clear that it was a big disappointment for him not to go to Barcelona.

"But there is a capacity of acceptance in him and it's quite incredible.

"He was away for 13 days, in Ivory Coast and Gabon. He came back on Thursday. And now on Saturday he is here and he played very well."