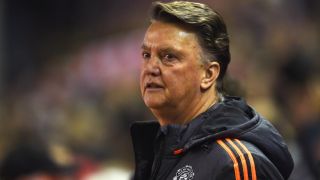 Marouane Fellaini says the blame for Manchester United's defeat against Liverpool in the Europa League lays squarely on the players and not manager Louis van Gaal.

United suffered a 2-0 loss in the first leg of their last-16 tie at Anfield after goals in each half from Daniel Sturridge and Roberto Firmino.

Much of the blame was directed towards Van Gaal following the defeat to their bitter rivals, but Fellaini revealed the players did not obey the Dutchman's game plan.

"We didn't press well in the first half. I think the second half was much better and we had more possession of the ball," the Belgium international said.

"But in the first half we didn't show enough respect to the game plan of the manager. That's why we conceded a lot of chances.

"The plan before the game was to press from the start. We didn't do it well at all first half so we changed in the second half and it was better."

Former United stalwarts Paul Scholes and Rio Ferdinand blamed the loss on a lack of leadership within the squad.

"The captains will talk when something needs to happen. I don't think it is about the leaders. We all have to do better at it," Fellaini said.

"All the players should be leaders.  Against Liverpool it is always like this – lots of duels and lots of challenges. In the first half we were not ready. The team was not ready.

"But we have to forget the Liverpool game for the moment and focus on the next one."

United's next game is against West Ham for a place in the FA Cup semi-finals.

"It was already a big game – but now it is even bigger. It is a massive game for us and an important week in the future of the season," Fellaini added.

"We will be focusing but we're playing at Old Trafford and we have to win.

"West Ham have bought great players and have a good manager in Slaven Bilic.

"They are playing well at the moment and are full of confidence so we have to be careful. But we are at home so we will be ready."