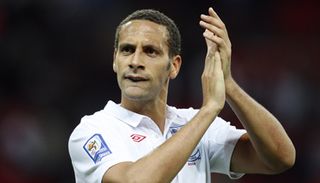 The decision, in a statement on the United and Football Association websites, came nearly two years after Ferdinand last played for his country in a Euro 2012 qualifier against Switzerland on June 4, 2011.

The FA said the central defender, who made his England senior debut against Cameroon at Wembley in 1997 and won 81 caps, had informed England coach Roy Hodgson of his decision.

"After a great deal of thought, I have decided the time is right for me to retire from international football," the player declared.

"At the age of 34, I feel it is right for me to stand aside and let the younger players come through, which allows me to concentrate on my club career."

Ferdinand represented England at every level from the under-17s upwards, captained England and was a member of three World Cup squads.

However, manager Roy Hodgson left him out of his Euro 2012 squad for "footballing reasons" amid tensions with Chelsea defender John Terry, who was involved in a racism row with Ferdinand's brother Anton.

Ferdinand was named in England's squad for two World Cup qualifiers last March after Terry had announced his international retirement but withdrew to safeguard his fitness for Manchester United.

His decision to then take a long-haul flight to Qatar to work as a television pundit for al-Jazeera did not go down well with England supporters, who could be heard singing songs against the player during the 8-0 crushing of San Marino.

Hodgson paid tribute to a player who, despite not being included in any of his teams, until Wednesday's announcement had not yet been ruled out of next year's World Cup in Brazil by the England manager.

"To have captained his country, to play at three World Cups and indeed score in one of those, marks him out amongst a very special group of players," Hodgson said in a statement.

"I appreciated the call from Rio to inform me of his decision, which clearly he had spent much time considering before reaching this point."

Ferdinand joined Manchester United from Leeds United in 2002 for 30 million pounds and has been a key part of their defence ever since, helping them win the Premier League title again this season.

His club career has not been without controversy, with the defender suspended for missing a drugs test in 2003.

"I have always been very proud to play for England," Ferdinand said.

"I would like to wish Roy and the team all the best for future tournaments. A big thank you to all the fans, managers, coaching staff and players that I have worked alongside - the journey has been incredible."