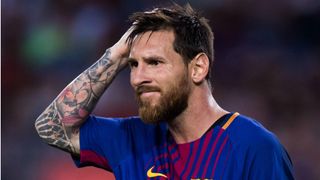 Barcelona sporting director Robert Fernandez hopes Lionel Messi signs his new deal "soon", while he is convinced Andres Iniesta will extend his stay at the club.

The LaLiga giants announced in July that Messi had agreed to a contract until 2021, with his previous deal due to expire in 2018.

While a formal signing of the contract was expected to soon follow, Messi is still yet to put pen to paper, leading to speculation over his future.

Fernandez is eager for the deal to be officially completed shortly, saying on Saturday: "I point to our president's words.

"[The signing] is an act which could happen at any moment. I hope it's soon."

Messi delivered for Barca on Saturday, scoring a hat-trick to lead Ernesto Valverde's men to a 5-0 thrashing of Espanyol.

Fernandez lauded the Argentina star for his performance, particularly after the international break.

"He's come back from international duty, after a lot of travel and two tough games," he said.

"He is capable of changing a game at any moment and the difficult thing he manages is to maintain that rhythm."

The star midfielder, 33, is out of contract at the end of the season and yet to agree to a new deal.

"What we want is that Andres is here for many more years and that he ends his career here," Fernandez said.

"I'm convinced that will happen."