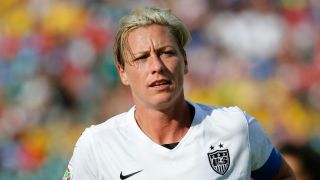 Wambach was issued a warning after she made a not-so-subtle jab about French referee Stephanie Frappart's decision to issue Megan Rapinoe and Lauren Holiday yellow cards in the Women's World Cup last-16 match against Colombia on Monday.

"I don't know if they were yellows," she said. "It seemed like she [the referee] was purposefully giving those yellows to maybe players that she knew were sitting on yellows.

"I don't know if that was just a psychological thing, who knows. Who knows?"

Wambach apologized later, saying "I'm not in the referee's head, and that's something I definitely take ownership of and apologize for."

However, she could still receive disciplinary action.

FIFA said Wambach's apology factored into its decision about her possible punishment.

"The chairman of the FIFA Disciplinary Committee took into consideration all the circumstances of the case, including the fact that Abby Wambach took full ownership and apologized for her comments in a timely manner," the statement said.

USA defender Meghan Klingenberg did not see the issue with what Wambach originally said.

"She wants them to play. I see no problem with that. And we're moving forward."

The yellow cards Rapinoe and Holiday received means they will have to sit out USA's match against China on Friday, since they were issued yellow cards earlier in the tournament.

Canadian striker Christine Sinclair made disapproving comments about the officiating after her team lost to United States in the 2012 Olympics. She was later suspended for four games for unsportsmanlike conduct.