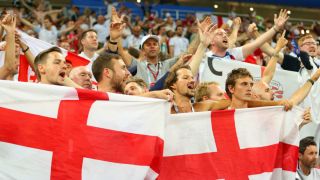 FIFA has warned the Football Association following "political chants" made by England supporters during the World Cup semi-final defeat to Croatia.

The governing body announced on Thursday that it would investigate "no surrender" chants made by some English fans inside the Luzhniki Stadium.

That investigation has now ended with the FA receiving an official warning.

A statement from FIFA read: "The FIFA Disciplinary Committee has warned the Football Association with respect to the misconduct of a group of English fans who performed political chants during the 2018 FIFA World Cup semi-final match between Croatia and England (cf. art. 67 of the FIFA Disciplinary Code).

"The decision was taken after having analysed the respective evidence available and considered all factors surrounding the infringement, including the fact that the incident was triggered by a very small group of fans."