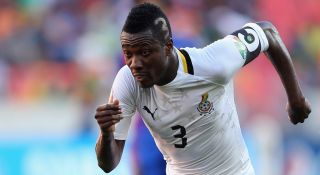 James Kwesi Appiah's men headed into the first leg of the CAF qualification play-off knowing they would need to be at their best against a side that did not drop a point in the group stage.

And Ghana did not disappoint as they produced a magnificent performance to all but ensure they will be at next year's finals in Brazil.

Gyan put the hosts in front early on before a Wael Gomaa own goal doubled their advantage.

Egypt did pull one back through Mohamed Aboutrika's penalty, but a strike from Majeed Waris, a second from Gyan and goals from Sulley Muntari and Christian Atsu ensured victory for Ghana.

Ghana took the lead after just four minutes when Gyan's fierce right-footed strike flew in off the post after the Al-Ain forward had been played in by Waris.

The hosts continued to dictate the play in the early stages and came close to doubling their advantage as Waris was denied by a brilliant save by Egypt goalkeeper Sherif Ekramy.

Ekramy came to the visitors' rescue again as he kept out a Waris header after the Spartak Moscow man had latched on to a cross from Michael Essien.

However, after 22 minutes, Ghana's pressure finally told, Gomaa turning into his own net in a failed attempt to steal the ball from Essien as the Chelsea midfielder surged into the box.

Egypt responded well and should have pulled one back when Mohamed Naguib headed wide with the goal at his mercy.

Bob Bradley's men did cut into the deficit four minutes before the break, Aboutrika converting from the spot after Rashid Sumaila had bundled over Mohamed Salah.

Muntari was involved again as Ghana put the game beyond doubt nine minutes into the second half, Gyan heading home the Milan man's scissor kick to net his second of the game.

Egypt suffered a blow as Ekramy was forced off with an injury, and his replacement Ahmed Al Shenawy was at fault for Ghana's fifth as his foul on Waris allowed Muntari to slot home from 12 yards.

And the rout was completed in the 89th minute by Atsu, who rounded things off with a fine individual effort.