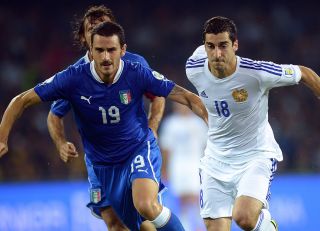 Yura Movsisyan gave the visitors the perfect start in the fifth minute, only to see Alessandro Florenzi equalise with a header midway through the first half.

With qualification already assured, Cesare Prandelli made nine changes from the side that drew 2-2 in Denmark on Friday, with Pablo Osvaldo and Riccardo Montolivo the only men to keep their place.

Armenia coach Vardan Minasyan made two alterations from the 2-1 home victory over Bulgaria, as Varazdat Haroyan and Artur Yedigaryan came in for Artur Sarkisov and Kamo Hovhannisyan.

Movsisyan gave the visitors a dream start in the fifth minute as the Italians surrendered possession on the edge of their own box, the striker clipping the ball over the lunge of Davide Astori before drilling the ball low and hard across Federico Marchetti into the corner.

Osvaldo had a chance to equalise six minutes later after turning smartly in the box, but the Southampton forward curled his left-footed shot wide of the post.

Ten minutes later, he wasted an even better chance after Lorenzo Insigne struck a post from 25 yards, the ball rebounded kindly for the forward, but his tame effort was straight into the arms of Roman Berezovsky with the goal gaping.

The equaliser was not long in coming however, Florenzi nodding home Insigne's delightful chipped cross from six yards in the 24th minute.

Insigne was proving the hosts' main threat and almost put his side in front in the 35th minute, deceiving Hrayr Mkoyan with a quick turn in the box before curling his shot narrowly wide of the right hand post.

After a quiet opening to the second half, it was Insigne who posed the danger once again in the 58th minute, driving into the box before bringing a good save from Berezovsky at his near post.

The Napoli man was in the action again three minutes later, running on to Balotelli's pass on the edge of the box, but he scuffed his effort and the goalkeeper made a comfortable save.

With 20 minutes to go, Mkhitaryan headed Gevorg Ghazaryan's left wing corner in off the crossbar and suddenly Italy's record of never having lost a home World Cup qualifier was under threat.

However, their blushes were spared somewhat as Balotelli ran on to Andrea Pirlo's pass and hooked the ball in.

Haroyan should have claimed a famous winner for his side with 10 minutes to go, but the defender sent his free header over from eight yards.

Balotelli dragged a shot marginally wide in stoppage time as both sides had to settle for a draw.