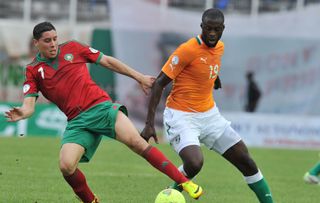 Sabri Lamouchi's men welcome Senegal to Abidjan for the first leg of their World Cup play-off knowing a win would put them in pole position to qualify for the finals in Brazil next year.

The hosts head into the game in poor form, though, having won just two of their last six games.

Midfielder Yaya Toure is Ivory Coast's top scorer in qualifying so far with four goals and the Manchester City star will be looked upon to play a pivotal role.

Strikers Didier Drogba and Salomon Kalou will also be expected to make an impact for a side well-fancied to progress.

However, Ivory Coast could face a tough task given Senegal are unbeaten in their last five outings.

Ivory Coast were victorious in the last meeting between the two sides, the second leg of an Africa Cup of Nations play-off in October 2012, which was suspended late in the second half due to riots among the Senegal fans after Drogba had scored twice to give his side a 2-0 lead.

Senegal have improved since that game, but will likely need Newcastle United striker Papiss Cisse to rediscover his best form if they are to seize an advantage.

Cisse has scored just one goal for Newcastle this season, but has been key for his country in qualifying, netting four times in six games.

The disappointing club performances of Cisse may be a concern to manager Alain Giresse, who was only appointed in January shortly after Senegal's failure to reach the African Cup of Nations finals.

Still, Giresse has strength in depth in his ranks, with Fenerbahce's Moussa Sow and Bordeaux's Henri Saivet both available to boost the forward line as Senegal look to reach the finals for the first time since 2002.