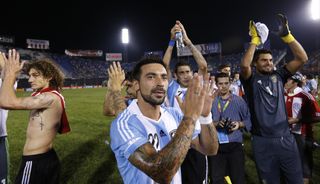 Alejandro Sabella's men were the dominant side at Estadio Defensores del Chaco, winning thanks to a brace of Lionel Messi penalties, plus goals from Sergio Aguero, Angel di Maria and Maxi Rodriguez.

Argentina goalkeeper Sergio Romero's howler gifted an equaliser to Paraguay in the first half through Jose Nunez but Di Maria and Messi put the result beyond doubt shortly after the break as their side stayed top of CONMEBOL World Cup qualifying.

Argentina struck first on 12 minutes after a fast counter-attack led to Paraguay being exposed on the break.

It was a three-on-one break and Di Maria's pass found Aguero at the back post, with the Manchester City forward brought down by the advancing Roberto Fernandez.

Messi stepped up and placed his penalty into the bottom corner as Fernandez dived the wrong way, giving him his 36th goal for Argentina.

The goal sent the Barcelona star into clear second on the all-time leading goalscorers list for his country, ahead of Hernan Crespo (35) but still some way behind Gabriel Batistuta (56).

Argentina's lead only lasted five minutes before a howler from Romero gifted Paraguay their equaliser.

Nunez flicked Miguel Samudio's cross goal-ward and Romero should have dealt with the effort but it bounced over the diving goalkeeper and into the net.

Argentina should have restored their lead three minutes later, but – with an open goal to aim at – Inter striker Rodrigo Palacio put his header wide from close range.

Paraguay captain Santa Cruz was denied by Romero on the half-hour mark, with the goalkeeper tipping the Malaga striker's header over.

It was the combination between Messi and Aguero which led to the latter giving Argentina a 2-1 lead, just moments after another nervy moment by Romero when he dropped a cross.

Messi cushioned down a pass with his chest for Aguero, who took a touch before firing into the bottom corner with his left foot.

Argentina were being given far too much space in the attacking third and Messi had two strikes at goal saved by Fernandez before half-time.

Aguero thought he had given Argentina a two-goal lead on the stroke of half-time but he was correctly ruled offside.

If Paraguay held some hope heading into the second half, it was dashed inside eight minutes after the break.

Di Maria netted in a one-on-one with Fernandez after a lovely Fernando Gago pass before Messi scored from the penalty spot again.

It was a soft penalty awarded against Salustiano Candia for a foul on Messi but came after Paraguay were again left exposed and outnumbered at the back.

Messi chose the other way with his penalty – shooting to Fernandez's left – but the Cerro Porteno goalkeeper was still unable to keep it out as the 26-year-old scored his 10th goal of the qualifying campaign.

Di Maria was denied a second when he had a shot cleared off the line by Oscar Romero after exchanging passes with Messi on the hour-mark.

Romero kept out Nunez with a fine save as the tempo slowed but there was still time for Paraguay to score a consolation goal through Santa Cruz, who tapped in Samudio's cross in the 86th minute, while Rodriguez capped off the rout for Argentina when he scored four minutes later.