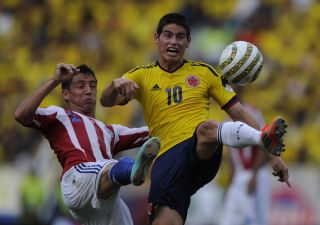 Jose Pekerman's side sit second in South American qualifying group and sealed their spot at next year's World Cup in Brazil with a stunning 3-3 draw against Chile on Friday.

Trailing 3-0 with just 25 minutes to go, Teofilo Gutierrez's strike breathed life into a Colombia side playing in front of their home fans in Barranquilla.

And two late Radamel Falcao penalties saw them claim an unlikely point to clinch qualification and spark wild celebrations as Colombia reached the World Cup finals for the first time since 1998.

Key to Colombia's qualification has been their terrific home form, which saw them win five matches in a row before the Chile draw.

They have not been as impressive on the road, winning just one of their last five away qualifiers, and Pekerman will demand an improvement on that against a struggling Paraguay.

Falcao's brace against Chile took him to nine goals for the qualifying campaign – only Argentina's Lionel Messi and Uruguay's Luis Suarez have scored more – and he has been well supported by Gutierrez.

Although the likes of Jackson Martinez and Luis Muriel may get more attention, the 28-year-old forward from River Plate has scored six goals in qualifying.

In stark contrast to Colombia's campaign has been Paraguay's, with the nation set to miss their first FIFA World Cup since 1994.

They have failed to adequately replace former coach Gerardo Martino – who is now in charge of Barcelona – after he left in 2011.

Francisco Arce and Gerardo Pelusso were sacked during the ill-fated campaign and new coach Victor Genes has seen no dramatic signs of improvement.

Malaga forward Roque Santa Cruz has top scored for Paraguay with just three goals and they have leaked goals at the other end, conceding 29 in 15 matches.

Paraguay lost 5-2 to Argentina in their last home qualifier and will seek a response to that result, but Colombia will be in high spirits and are expected to finish their campaign on a high.