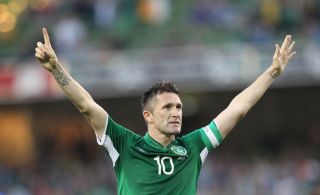 Ireland, who have slipped to 59th in the FIFA rankings following a poor run that saw previous manager Giovanni Trapattoni sacked, triumphed courtesy of goals from captain Robbie Keane and defender John O'Shea, with a late Dmitriy Shomko own goal adding gloss in Dublin.

They trailed in the early stages after Shomko's stunning strike from distance but Keane scored from the penalty spot – his 61st goal for his country in 130 appearances – to level proceedings in the 17th minute.

O'Shea then punished Kazakhstan goalkeeper Andrey Sidelnikov for spilling a header with his first goal in more than 10 years for Ireland before Shomko turned into his net in the latter stages as Ireland won just their second World Cup qualifier of the year.

Keane had the game's first chance in the ninth minute and although his flick header was tame, Sidelnikov fumbled it in a sign of things to come.

The visitors should have taken the lead moments later, only for Maxat Baizhanov to put a free header over the bar, but their frustration did not last long thanks to Shomko's brilliant effort.

Shomko made the most of a poor attempted clearance from Seamus Coleman, hitting a stunning left-footed strike from 25 yards that went in off the inside of the post and left Ireland goalkeeper David Forde with no chance.

Keane converted the resultant penalty with ease before another mistake allowed Ireland to score, with Sidelnikov the culprit on this occasion.

The goalkeeper flapped at a Dunne header following another innocuous Reid corner and O'Shea reacted quickest, hooking into the net from close range with his left foot.

The first half petered out following Darron Gibson's knee injury, which forced him off on a stretcher after a fall.

Keane shot wide in the first minute of the second half and a sustained period of pressure followed, as Reid, Glenn Whelan and Marc Wilson went close for the hosts, who were nearly made to pay for their profligacy when Kazakh sub Igor Yurin flashed an effort wide.

Reid had two more efforts on goal before Ireland sealed the result with 14 minutes to play.

Anthony Stokes did well to keep a ball in at the byline, and he fed Aiden McGeady, who saw his ball across the face of goal turned in by Shomko.