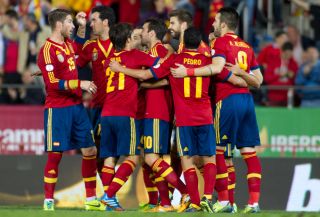 Vicente del Bosque's side will head into the match in Albacete full of confidence given their outstanding 52-match unbeaten run in World Cup qualifiers.

The current world and European champions have impressed in Group I, winning five of their seven qualifiers.

The impressive form of France has forced qualification from the pool to go to the final match though, with Didier Deschamps' side still in with a chance of finishing top if Spain lose.

That is highly unlikely though, with Georgia having won just one of their seven qualifiers in the current campaign.

Spain will be keen to improve on their showing on Friday, when they were below-par in a 2-1 win over Belarus in Mallorca.

Swansea City forward Michu failed to impress on his debut and after a lacklustre opening half, it took a piece of individual brilliance from Xavi to give them the lead.

Alvaro Negredo scored a late header - meaning Sergey Kornilenko's consolation did not affect the result - but Del Bosque will demand more from his players this time around.

Captain Iker Casillas could return to the starting line-up after sitting out the win over Belarus, while midfielder Andres Iniesta - who also began the match on the bench - is likely to start.

Uncapped Sevilla defender Alberto Moreno was called into the squad for the matches against Belarus and Georgia but did not feature on Friday, while Real Madrid star Isco could be called on to replace Michu.

While the match means little for Georgia, they will be hoping to end the qualifiers on a good note.

They cannot finish higher than fourth but will be determined to end a 10-match winless run.

Temuri Ketsbaia's side started the qualifying campaign well, with a win over Belarus and a draw against Finland coming in their first three matches.

They have struggled since then though, with a 0-0 draw against France last month the only other highlight of their campaign.

Georgia have scored just three goals in their seven qualifiers but will take heart from their gutsy showing in the reverse fixture in Tbilisi last year.

Spain won that match 1-0, but only thanks to an 86th-minute goal from Tottenham striker Roberto Soldado.

A similar result is likely, but Spain will be keen on wrapping up the result - and their qualification - much earlier on this occasion.