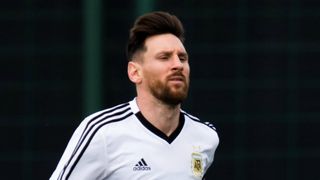 Former Portugal star Luis Figo expects Lionel Messi to raise his game at the World Cup, which he believes could be the Argentine's last chance to lift the football's most famous trophy.

Figo, whose five-year spell at Barcelona ended in 2000 - four years before Messi broke through at Camp Nou - highlighted the differences between international and club football when assessing the 30-year-old's chances of success in Russia.

Messi made his World Cup debut in 2006 when Argentina reached the quarter-finals and was part of the team that made the last eight in 2010, before helping them to a first final in 24 years in 2014.

But the five-time Ballon d'Or winner has only showed glimpses of his very best football on international football's biggest stage and Figo told Omnisport: "It's different when you play for the national team and for your club.

"I think it's one of the last chances he has to perform with a great result in a World Cup.

"He will probably try harder and in the best way to achieve the goals Argentina have in the World Cup."

Messi scored 34 goals in 36 appearances as Barcelona won LaLiga in 2017-18 and also helped them to victory in the Copa del Rey, but Figo hopes he has saved something special for the World Cup.

"I hope that he can arrive at the competition in the best physical condition possible to perform and give the fans the best he can do," he added.

Figo, who captained his country to fourth place at the 2006 World Cup in Germany, backed Portugal coach Fernando Santos' squad selection but warned the team against complacency after their triumph at the 2016 European Championship.

Portugal will face Spain, Morocco and Iran in Group B and Figo said: "The World Cup is different from the Euros because you can play different national teams with different styles of football that sometimes you are not used to.

"It's very important, the first phase of group matches, and then it depends on the other groups to make the chances or not to achieve the final win.

"In the beginning Portugal will have the same hopes as the other teams. I think Portugal after the Euros have confidence and a good team - they have youngsters and experienced players. They have an experienced coach too. Let's see."