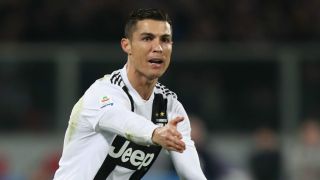 Rodrigo Bentancur and Giorgio Chiellini were unlikely goalscorers with Cristiano Ronaldo also on target as Juventus won 3-0 at Fiorentina to move 11 points clear at the top of Serie A.

Juve were far from their brilliant best in Florence on Saturday but Bentancur's first-half strike set up a fifth straight league win for the defending champions that stretches their lead over Napoli.

Federico Chiesa was guilty of wasting Fiorentina's best opportunities, but Chiellini made no mistake when he was presented with a chance, the defender's header looping in despite Alban Lafont's best efforts.

After Ronaldo converted a late penalty, Juventus collected three points from a trip to Florence that saw vice-president Pavel Nedved condemn graffiti referring to the Heysel disaster outside the Stadio Artemio Franchi.

Marco Benassi and Nikola Milenkovic had early efforts for the hosts before Chiellini was fortunate to see his clearance fly off Edimilson Fernandes and straight at Wojciech Szczesny.

Juve saw penalty appeals for a supposed handball rejected by VAR, but they took the lead in the 30th minute with a superbly crafted move and fine finish.

Bentancur swapped passes with Paulo Dybala and, with Ronaldo's run creating space for the midfielder, he slotted home past Lafont from the edge of the penalty area.

Benassi was just off target again after the restart, with Chiesa firing an effort at Szczesny as Fiorentina continued to threaten.

Chiesa failed to make the most of another sight of goal with a shot easily saved by Szczesny in the 62nd minute, Ronaldo then seeing a floated free-kick beaten away by Lafont.

Although the Fiorentina goalkeeper got a hand to Chiellini's acrobatic strike, the bouncing ball evaded Ronaldo in the six-yard box to spin in for the defender's first league goal since October 2016.

And when Fernandes conceded a late penalty for blocking a Mario Mandzukic cross with his arm, Ronaldo stepped up to beat Lafont and smash in his 10th of the season.

What does it mean? Juve look unstoppable

A run of four wins without conceding in all competitions has shown Juve's strength. Having qualified for the knockout rounds of the Champions League this week, their lead at the top of the table is now 11 points and nearest rivals Napoli face a tough task to narrow a generous gap.

With Miralem Pjanic out injured, Juve occasionally lacked creativity in central midfield. But 21-year-old Uruguay international Bentancur showed he can be a threat in front of goal. Although considered a defensively minded player, Bentancur's second Serie A goal was beautifully taken.

Fiorentina have only scored four goals in their last seven league games, none of which have been wins - although five were drawn. Chiesa, whose last goal was in September, missed a few chances to get on the scoresheet as Leonardo Bonucci marked his 300th Serie A start with a clean sheet.

Juve will seek yet another win at home to Inter on Friday, with Fiorentina away to Sassuolo two days later.