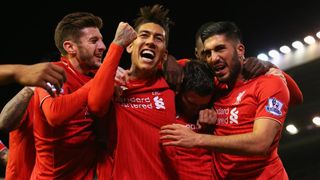 Roberto Firmino is confident Liverpool have what it takes to beat Manchester United on Sunday if they replicate their performance from Wednesday's 3-3 draw with Arsenal.

Jurgen Klopp's men fought back after falling 3-2 behind in midweek and eventually salvaged a draw through Joe Allen's late equaliser, with Firmino netting his side's previous two goals.

They meet United at Anfield on Sunday and Firmino is brimming with confidence ahead of the highly-anticipated match.

"Manchester United are a big team and I know how big this derby is here," the Brazilian told the official Liverpool website.

"If we do as well as we did up front [against Arsenal] against them, we have a good chance to win on Sunday."

Firmino shone against Arsenal after previously impressing versus Manchester City and much is expected of the former Hoffenheim man in Liverpool's next game against a big opponent, but the Brazilian is determined to prove his worth versus lesser opposition as well.

"I hope I can play like that against all teams, not only the big teams," he added.

"Obviously it's good to play well against the good teams but my aim here is to help the team by scoring goals and doing whatever I can on the pitch."