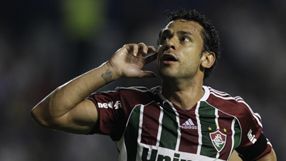 Fred struck in the 18th minute of the 'Fla-Flu' derby at the Engenhao from a cross by former Barcelona, Chelsea and Portugal midfielder Deco and then withstood the attacks of opponents who enjoyed more possession and goal chances.

Fluminense, who have won 17 of their 27 matches, lead on 59 points with 11 matches to go after their closest challengers Atletico Mineiro were held 1-1 away by lowly Portuguesa on Saturday. Mineiro, who have not won in four matches, lost 2-1 to mid-table Flamengo in midweek.

Flamengo's Thiago Neves hit the post twice with free-kicks but they could not find a way past a Fluminense side displaying the same qualities that took them to the title in 2010, strong defence and a good rate of finishing from few chances.

Fred's team needed some strong goalkeeping from Diego Cavalieri to keep the three points, including a penalty save from Argentine substitute midfielder Dario Bottinelli three minutes from time.

Flamengo had full-back Ramon sent off in added time for a second booking after a foul on Marcos Junior.

"We had good chances to equalise and even turn the game around but sadly we didn't score in the first half and conceded one. Flamengo deserved at least a draw, that would have been fair," striker Wagner Love told reporters.

Palmeiras are still in danger of relegation but continued their recovery with a second successive victory under coach Gilson Kleina, who took over from the departed Luiz Felipe Scolari.