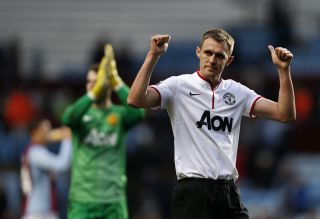 The Scotland international has been blighted by a chronic bowel condition for the past two years and made his first appearance since Boxing Day 2012 on Sunday.

Fletcher appeared for the last 20 minutes at Villa Park as a replacement for Ryan Giggs, as United recorded a comfortable 3-0 triumph.

The 29-year-old is hopeful his problems, which forced him to take a prolonged break from the game, are now behind him.

Speaking to MUTV, Fletcher said: "This is it - I'm back for good. This is hopefully the game which means I'm back now.

"I seem to have come through the setbacks and health issues and I'm thankful for that. It's onwards and upwards now.

"Ever since I was a kid, I've wanted to play football. I've been fortunate enough to have the opportunity to play for Manchester United and I wasn't going to give that up lightly.

"I battled through it, and I'm only 29 years old. I think I've got plenty more years of playing left in me.

"I could have a career all over again if I get my health right, and hopefully that's what I'm going to do.

"I'm still building up my fitness, but I don't want to take it easy. I've done enough of that, and I want to be involved, to get us back to where I know we should be."