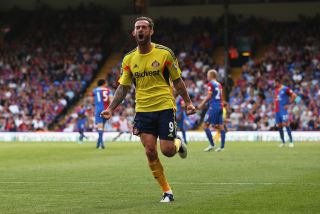 Scotland striker Fletcher suffered a dislocated shoulder in the 3-0 defeat at West Brom last month, which proved to be Paolo Di Canio's last game in charge of the Stadim of Light outfit.

It was initially feared that the injury-prone forward was facing another lengthy spell on the sidelines, but those concerns were allayed when it was revealed he would be out for a maximum of six weeks.

And Poyet, who was confirmed as Di Canio's successor last week, hopes to have Fletcher available for selection in Saturday's Premier League game at Swansea City.

"There is a big possibility [Fletcher will feature]," Poyet said. "It's some of the very good news from this week.

"Every player is important but we know in football that there is a few positions that are key; the goalkeeper, the spine of the team and the main man up front scoring goals.

"We need goals; we need players who have got the ability and Fletcher is one of those players."

However, former Brighton and Hove Albion manager Poyet will take no risks with last season's leading scorer, who has been plagued by injuries during his time at Sunderland.

"It's funny because we are trying to make him train as much as we can but without breaking him," he added.

"We are nearly there and I’m sure he's also happy to be part of the team trying to get ready for Saturday."