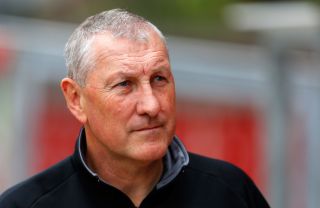 Inverness were looking to go level on points with leaders Celtic in the Highland derby, while a victory for Ross would have elevated them into sixth position.

The top-flight encounter was locked at 0-0 at half-time on Friday, before a technical failure during the break saw the Global Energy Stadium descend into darkness.

Both sets of players re-emerged as the lights twice momentarily came back on, but upon a third failure referee John Beaton decided to bring a halt to proceedings.

After the abandonment, Inverness manager Terry Butcher told BBC Sport: "It's just one of those things.

"I'm not sure what the reason was but we live to fight another day and we'll come back and do it all again. It's disappointing of course."

It was the visitors who made the brighter start and they could have gone ahead as early as the 13th minute when Richie Foran headed a long punt into the path of Nick Ross but he miskicked when one-on-one with Mark Brown.

Inverness thought they had the lead when Andrew Shinnie's free-kick found Ross in the area and his fierce strike hit the back of the net, however the celebrations were curtailed were denied by the offside flag.

County survived a barrage of corners, and again nearly fell behind on the strike of half-time when Brown scrambled Gary Warren's looping header to safety.

There was to be no more action, however, with the floodlight failure bringing a premature end to proceedings.