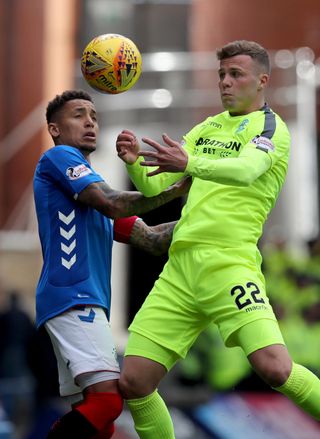 Hibernian striker Florian Kamberi has described his loan switch to Rangers as a “dream move”.

And the 24-year-old is looking forward to playing in front of the “best fans in the world” after swapping places with midfielder Greg Docherty, who has gone to Hibs on loan.

Gers moved for the Swiss-born Albania international after losing Jermain Defoe to a calf injury.

The former Grasshoppers Zurich player, who has scored 20 goals in 65 Hibs appearances, said on the Rangers website: “I am very excited.

“Ever since I came to Scotland it has been a dream for me to move to Rangers and it has happened today, so I am a very, very happy man.

“For me, Ibrox is the best atmosphere I have ever played in.

“My second game for Hibs was against Rangers at Ibrox and after the game, I told my agent immediately my dream would be to play in this stadium in front of these fans as they are the best fans in the world – the support is massive.”

Rangers manager Steven Gerrard added: “We’ve watched him for some time and know what he can bring to the group.

“He is a hard-working, goalscoring attacker, who we believe will be able to contribute in a positive way to what we want to achieve this season.”