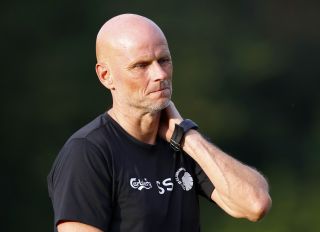 Ahead of the Stadion Koln encounter, the PA news agency takes a look at the Danish side.

Copenhagen have won the Danish Superliga title 13 times over the years but had to make do with the runner-up spot this time around. FC Midtjylland were nine points ahead of FCK at the end of the regular season and extended that to 14 points by the end of the Championship Round as they comfortably won the league. They were knocked out in the Danish Cup quarter-finals but have had a more fruitful time in Europe.

Copenhagen are through to their first ever European quarter-final after a continental campaign to remember – albeit one that started in disappointing fashion. Stale Solbakken’s side kicked off with a 3-0 aggregate win against Welsh side TNS in the Champions League second qualifying round, only to bow out to Red Star Belgrade on penalties in the next stage. FCK fared better in the Europa League, beating Riga in the play-offs before finishing second in Group B behind Malmo. Copenhagen knocked out Scottish champions Celtic in the round of 32, before beating newly crowned Turkish league winners Istanbul Basaksehir by overturning a 1-0 first-leg loss with a 3-0 home triumph on Wednesday.

Ole Gunnar Solskjaer knows a thing or two about Copenhagen’s manager, having played alongside Solbakken for Norway and shadowed him for a short while as a young coach in 2011. The former midfielder played for, among others, Wimbledon in a playing career cut short by a heart issue. Solbakken started his coaching journey at HamKam, before enjoying a successful stint as Copenhagen manager between 2006 and 2011. Short spells at the helm of Cologne, where this quarter-final is being held, and Wolves, another of this season’s Europa League quarter-finalists, followed before returning to FCK in 2013. Solbakken has won eight Danish titles and four domestic cups across his two spells at the club.

Copenhagen are built on a squad rather than star names, but there are a few recognisable figures among the ranks. Guillermo Varela is well known to United fans. The Uruguay international made 11 appearances for the club after joining from Penarol in 2013, with the full-back returning to the Montevideo club in 2017. Copenhagen captain Zeca is a self-confessed Manchester United supporter.