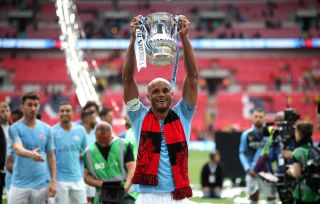 Vincent Kompany captained Manchester City to an unprecedented treble as they beat Watford 6-0 to lift the FA Cup.

Goals from David Silva, Raheem Sterling (3), Kevin De Bruyne and Gabriel Jesus made it a day to remember for City at Wembley.

Going out with a bang?

1 – Manchester City have become the first men’s team to win the domestic treble in England, winning the Premier League, FA Cup and League Cup all in 2018-19. History. #MCIWAT#facupfinalpic.twitter.com/OB8OloqGUx— OptaJoe (@OptaJoe) May 18, 2019

This might very well be Kompany’s 360th and final appearance as he is out of contract in the summer and there is no new deal on the table yet. The Belgian, who joined the club 11 years ago from Hamburg, is due to talk to Pep Guardiola next week, but if this was the end it will be a fine way to go out. Kompany helped his City team into the record books as they won all three domestic trophies – four if you include the Community Shield – and became the first team to do so in this country. Not only that but they also racked up the biggest winning margin in an FA Cup final since 1902-03. Although the Champions League still alludes City, there is little doubt they are an unstoppable force in the English game. If Kompany does depart, he is doing it with a side absolutely at the top of their game.

Time for the trophy lift. Start the party, @ManCity! 🎊https://t.co/pMsyeREwEu— The Emirates FA Cup (@EmiratesFACup) May 18, 2019

Kompany made a familiar traipse up the Wembley stairs to collect a trophy for City. All in all, not including Community Shields, this was his 10th major honour in a sky blue shirt. He has won four Premier Leagues, four League Cups and now two FA Cups, which makes him among the most decorated players in the club’s history.

Watford captain Troy Deeney was glowing in his praise of Kompany before the game, calling him the best defender in the Premier League since Rio Ferdinand. But he also warned that the Belgian would not enjoy coming up against him at Wembley and that he would not be bullied. Ultimately, a head-to-head between the two players did not really materialise as Deeney tended to position himself near Aymeric Laporte. There was one moment when Kompany denied his counterpart just before half-time as he made a vital interception when he was about to pull the trigger.

Getting away with one

Kompany’s day might have turned out differently had VAR decided to get involved in Watford’s strong claims for a penalty in the 21st minute. Abdoulaye Doucoure’s shot appeared to hit the Belgian’s arm, but referee Kevin Friend waved away ferocious appeals from Watford’s players and the decision was not reviewed by VAR. Kompany can count himself lucky as, with his arm outside of his natural body shape, had the incident happened in a UEFA competition, a penalty would almost certainly have been given.

As the scoreline suggests, Kompany did not have too much defending to do, but when he did he did it well. As well as his crucial intervention on Deeney in the first half, he also organised his defence well when defending set-pieces against a team that thrives in those situations. He won all five of his aerial duels and made 61 successful passes.