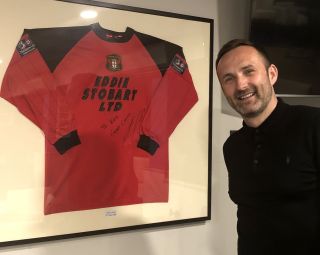 Last year marked the 20th anniversary of a goal that ranks as one of the most improbably dramatic in living memory, a close-range finish from the unlikeliest candidate on the pitch and one that saved a club’s status in the Football League.

Here is the PA news agency’s interview with Jimmy Glass, two decades on from his moment in the sun.

In the 20 years since Jimmy Glass produced one of the most memorable strikes in footballing history the goal-scoring goalkeeper has often wondered if it played a part in another era-defining injury-time winner.

Glass entered sporting folklore on May 8, 1999, when his hopeful charge upfield saw him ram home an injury-time corner to hand Carlisle a dramatic 2-1 victory over Plymouth. The finish was scrappily effective, but the circumstances were positively unbelievable.

The five-yard effort saved the Cumbrians’ seemingly doomed Football League status with effectively the last kick of the season. Not only had it been scored by a goalkeeper, but one who was playing his third and final match for the club on an emergency loan.

The fairytale story captured the public imagination, reminding everyone of football’s endless possibilities and has become such a well-known tale that even Glass himself views it from a distance these days.

“I didn’t fulfil my potential as a footballer, but I have got this phenomenal moment that I’m part of, and I say ‘part of’ because it’s not just my goal any more,” he told the PA news agency.

“I’ll treasure it for as long as I live, but it’s a goal for everyone who loves the sport. It’s football’s goal.”

If that is an admirably humble assessment of the remarkable high in an otherwise pedestrian playing career, then Glass can be forgiven for pondering if it had a tiny influence on events somewhat higher up the food chain.

Exactly 16 days after events at Brunton Park, Manchester United scored twice in added time to beat Bayern Munich in the Champions League final. Current United boss Ole Gunnar Solskjaer was the man to seal it in the dying seconds, arguably the defining moment of the Sir Alex Ferguson era.

#FL125 archive: After yesterday's drama it's worth looking back at when keeper Jimmy Glass saved @officialcufc in '99 pic.twitter.com/mKXRLriJ3t— E F L (@EFL) April 28, 2013

“The Nou Camp…another last-minute goal… I always have this thing in the back of my mind you know? That maybe I helped them in some way, just to keep going until the last minute,” said Glass.

“Everyone was talking about it at the time, the old cliches like, ‘It only takes a second to score a goal’. I proved it, the romance of this special game. I’m glad it wasn’t Peter Schmeichel who ran up and scored it, though, that might have made mine look a little lame.”

The remainder of Glass’ career failed to live up to the moment and he was soon playing the non-league football he had spared Carlisle, ultimately retiring disillusioned at the age of 27.

Might it have been a different story in the modern day, either on or off the pitch?

“I used to play as a striker so I was a guy who could play with my feet….20 years on that makes you worth about £50million!” he added with a smile.

“In my day that wasn’t the done thing, managers didn’t like a keeper who took risks. I don’t know how (Manchester City keeper) Ederson would have got on in 1999 with his nutmegs and no-look passes. Did I make lots of money from the goal? No I didn’t. Did I go to work in the real world, drive a taxi and struggle like everyone else? Yes I did. If it came about now maybe I’d be on reality TV, in the jungle (on ‘I’m a Celebrity’) with Harry Redknapp.”

There was a happy, Premier League ending to Glass’ story, though, with a player liaison role at former club Bournemouth, helping the next generation and content with his own road.

“I’ve come to terms with my frailties, the things I should have done better, and being involved with Bournemouth has reignited my passion for the game,” he explained.

“Eddie Howe is very pro my goal and once he asked me to talk to the lads about it the night before a game at Old Trafford. A lot of them didn’t know about it and they were transfixed.”