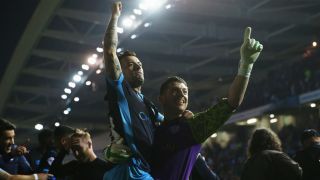 The Football League has proposed a radical shake-up to the structure of English football which could see a fifth division added for the 2019-20 season.

Distributed to member clubs ahead of an AGM next month, the proposal would mean the number of teams increases from 92 to 100, with 20 in each of the five leagues.

"At this point, the board of the Football League is offering no recommendation other than asking clubs to give the matter their full consideration," it said in a statement.

"The proposal stems from English football's collective concerns about the fixture calendar and enjoys the 'in principle' support of executives from the Premier League and FA.

"The Premier League is due to take a report to their clubs at their summer meeting, while the FA Executive needs to consult with its board."

A reduction in scheduling conflicts, an increased prospect for success for British clubs in Europe and the prospect of no relegation from the football league for the 2018-19 season are among the benefits extolled by the organisation.

Chief executive Shaun Harvey believes the additional sides should come from the top of the National League – the highest non-League division in the existing structure.

"The logical place for the extra clubs to come from would be promoting the next six teams [along with the two that already go up] from the National League," he told BBC Sport.

"Some of those teams are already professional and the extension to the league may suit them. There are clear benefits to everyone."

A final decision on the proposals will not need to be made until Football League clubs convene for the 2017 AGM in June.