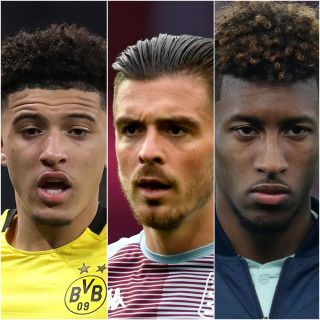 Aston Villa will fight to keep hold of captain JackGrealish amid huge interest from Premier League rivals, including Manchester United, reports the Sun. Dean Smith’s side will offer a deal worth £100,000-a-week to keep the 24-year-old, the paper adds.

Meanwhile, Manchester United could drop their plans to sign JadonSancho after Borussia Dortmund set a target of £108million for the winger, the Daily Mail writes. The paper adds the Old Trafford side could consider Bayern Munich’s KingsleyComan as an alternative if the Bundesliga side do not budge on their valuation.

Their cross-city rivals Manchester City have not made an offer for Barcelona right-back SergiRoberto despite rumours linking the 28-year-old with a move to the Etihad, reports the Manchester Evening News.

Leicester are running the rule over Burnley’s James Tarkowski but the Clarets will be looking for at least £50m for the defender, says the Daily Mail.

RyanFraser is considering a £50,000-a-week deal with Crystal Palace after leaving relegated Bournemouth, according to the Daily Mail.

Jamal Lewis: The Canaries could be set to part ways with their Northern Ireland left-back with Liverpool looking to bring in the 22-year-old for around £10m, says the Daily Mirror.

Ismaila Sarr: Liverpool will tussle with Crystal Palace and Wolves for the signature of the winger who is currently on the books of relegated Watford, writes the Watford Observer.

Francisco Trincao: Leicester are keen on signing the Barcelona forward on a two-year loan deal with a view to a potential permanent move, according to the Guardian.