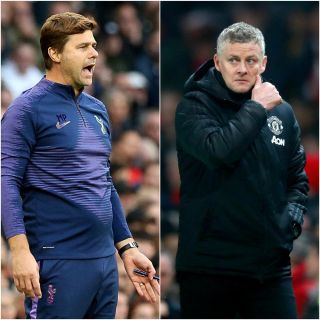 Speculation over Ole Gunnar Solskjaer’s future at Manchester United has been reignited by a public appearance linked to a prominent figure connected to the club by Mauricio Pochettino. The Daily Mail has published photos of the former Tottenham boss at the Brentford-Leeds match on Tuesday night, nearby United PR man Neil Ashton. The pair did not sit together, but Pochettino walked into the seating area at Griffin Park just in front of Ashton, who heads a PR firm for whom United are a major client.

Despite that conjecture, The Sun reports Solskjaer is looking to sign Leicester’s James Maddison and Aston Villa’s Jack Grealish next summer, for a combined £160million. Solskjaer is said to be looking for new attacking options after what has been a disappointing current season, with United six points off the top four. The proposed swoop may depend on whether Solskjaer can offload expensive midfielder Paul Pogba first.

United are also linked to an audacious £120million bid to buy Jadon Sancho, the Daily Mirror says. The England youngster is enjoying another stellar season at Borussia Dortmund. Chelsea are keen to sign the 19-year-old, with Willian and Pedro both possibly leaving the club next summer, but United are reportedly confident they can beat the Blues to his signature.

Jose Mourinho is gearing up for a £120million summer buying spree in hope of adding pace to Tottenham’s defence, according to the Daily Mail. Benfica’s Ruben Dias tops the shopping list as Mourinho looks to youth, with Norwich’s Max Aarons, Bournemouth’s Nathan Ake and Leicester’s Ben Chilwell also under consideration. Dias, 22, has previously drawn attention from Manchester United, Manchester City and Liverpool.

Tottenham defender Jan Vertonghen could be on his way to Ajax, with the Dutch club mulling a summer approach, the Guardian reports. The 32-year-old will be out of contract at the end of the season.

Shane Long: The 33-year-old Ireland striker is expected to delight Southampton fans by signing a new deld with the club, the Southern Daily Echo reports.

Alexander Sorloth: Aston Villa are tipped to lodge a £15million bid for Crystal Palace’s 24-year-old Norway striker, currently on loan with Trabzonsport, according to Turkish Football.