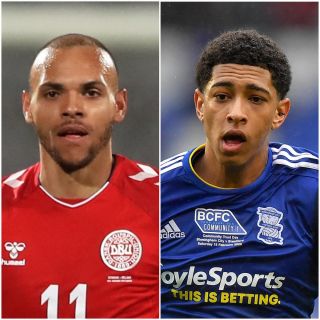 West Ham are set to make a surprise bid for Denmark’s MartinBraithwaite, even though the striker only joined Barcelona in February. The Daily Mail reports the Hammers want the former Middlesbrough and Leganes striker to add firepower to their attack as they face Premier League relegation. The 28-year-old joined the Catalan giants for £15 million, and after appearing just three times without scoring a goal the club are willing to let him go for a similar amount.

Borussia Dortmund are on the cusp of signing Birmingham sensation Jude Bellingham, according to the Birmingham Mail which cites Germany’s Bild. The 16-year-old midfielder has been targeted by Manchester United, although it has emerged his camp had progressed in negotiations with the Bundesliga giants prior to the coronavirus pandemic.

James Rodriguez is not needed at Real Madrid but could soon reunite with Everton manager Carlo Ancelotti. Madrid will try to move on the Colombia midfielder this summer so they can make some money prior to his contract expiring in 2021. The 28-year-old worked at Los Blancos with Ancelotti and the Italian now wants to bring him to the blue part of Merseyside, reports the Daily Mirror which cites Spain’s Marca. Arsenal and Wolves are also set to be interested in the player.

Sheffield Wednesday left-back Morgan Fox has been linked with a possible move to his club’s Championship rivals Middlesbrough. The Yorkshire Post cites Football Insider as saying Boro are “big admirers” of the 26-year-old, who has also attracted the interest of Nottingham Forest, West Brom and Huddersfield.

Illan Meslier: The 20-year-old goalkeeper, on loan from Ligue 1 team Lorient, will sign with Leeds permanently if the side secure promotion to the Premier League, the Mirror reports.

Willian: Tuttosport reports the Chelsea and Brazil midfielder, 31, could reunite with former Blues manager Maurizio Sarri at Juventus this summer.