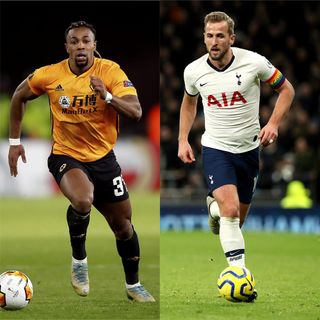 Manchester United are still keeping an eye on Harry Kane, with the Tottenham and England star said to be still contemplating his future, the Evening Standard reports. While Spurs do not want to sell, the striker has held open the chance that he may want to leave if the club can not match his ambition. United’s main target for the summer remains Jadon Sancho, but Kane is still prominent in their considerations should they fail to sign the Borussia Dortmund striker.

Wolves are adamant they will not sell Adama Traore for less than £70million as Liverpool eye on the wide forward, Football Insider says. Liverpool are keen on the 24-year-old in case they lose either Mohamed Salah or Sadio Mane. Traore had been rated as worth up to £90million. The effect of the coronavirus pandemic on football’s price structure has led to a review of that assessment, but Wolves insist he would still be worth at least £70million.

Manchester City are interested in signing Inter Milan striker Lautaro Martinez, Marca reports. The 22-year-old Argentina striker has been in strong form for Inter and has come onto City’s radar, with Sergio Aguero now nearing his senior years at the age of 31. City will face stiff opposition to sign Martinez, however, with Barcelona and Real Madrid also interested.

Liverpool are set to launch a double-swoop on Borussia Monchengladbach for highly-rated duo Denis Zakaria and Marcus Thuram, the Daily Express reports. Swiss international Zakaria, 23, has emerged as one of the Bundesliga’s top defensive midfielders this season. Thuram, 22, has come into Liverpool manager Jurgen Klopp’s considerations as he seeks to fortify his attack.

Arsenal are keen to sign Athletic Bilbao defender Unai Nunez in the summer, Spanish outlet La Razon reports. The 23-year-old Spain international has a £26million release clause in his contract. The Gunners’ Spanish boss Mikel Arteta is said to have identified him as a means of strengthening his central defence, though Nunez has also been linked to several other clubs.

Chelsea star Willian reveals there have been 'no transfer offers' for him as PSG and Barca emerge as favourites https://t.co/a2wE7JD9S5— The Sun Football ⚽ (@TheSunFootball) April 6, 2020

Olivier Giroud: The 33-year-old has begun talks on a new contract to stay at Chelsea, Football.London reports.

Jerome Boateng: Chelsea and Arsenal are in contention to sign the 31-year-old German defender from Bayern Munich, according to the Daily Mail.

Ferran Torres: Valencia’s 20-year-old Spanish winger is a target for Liverpool, Manchester City and Manchester United, according to Goal.