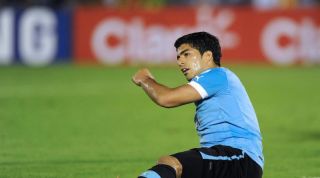 Suarez's spot in Brazil has been plunged into doubt by a knee injury, which has required surgery.

Uruguay were hugely impressive in South Africa four years ago, finishing fourth, but Suarez's absence would make replicating those lofty achievements even tougher.

And veteran striker Forlan, who has seen the Liverpool man overtake him as Uruguay's top scorer this season, believes the squad would receive a major boost on and off the pitch should Suarez make a successful comeback.

"That would be much better for all of us. Luis came to the training ground in the morning to see us.

"We haven't seen him for a week so it was nice to have him around again. He told us he is in good shape and recovering well and his treatment has been good.

"Everybody wants him to be ready."

Uruguay continued their preparations for Brazil with a 1-0 win over Northern Ireland in Montevideo on Friday, the win secured by Christian Stuani's second-half goal.

Forlan believes playing against similar opposition to England will be of great benefit when the sides meet in their second Group D fixture in Sao Paulo on June 19.

"It was good preparation because Northern Ireland play in the same style as England," he added.

"The England game is not more important for me because every game in a World Cup is just as important, but it will be a tough one."