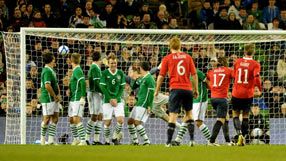 The Norwegians, who last reached the European Championship finals 10 years ago, have won their three opening Group H games - including victory over Portugal - and proved too well organised and clinical for the uninventive hosts.

They had to come from behind after striker Shane Long, replacing injured captain Robbie Keane, collided with centre-back Brede Hangeland in the box and coolly put Ireland ahead from the penalty spot on five minutes.

The lively Long, who is putting pressure on Keane with Ireland's record scorer out of favour at Tottenham Hotspur, was one of his side's few bright sparks and had a hand in another chance soon after when winger Damien Duff went close.

Ireland, playing in front of a half-empty stadium, were unable to build on early pressure and were punished just after the half hour when Blackburn Rovers attacker Morten Gamst Pedersen curled a free-kick into the top left-hand corner.

The Italian mainly opted for experience and keeper Shay Given, who moved one cap ahead of Kevin Kilbane to make a record 109th Irish appearance after the Hull City full-back was ruled out with injury, was beaten again four minutes from time.

Pedersen was again involved, finding Huseklepp with a deep cross and allowing the Brann forward to finish off a swift counter-attack from a tight angle.