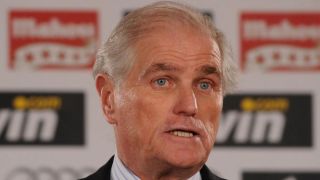 Former Real Madrid president Ramon Calderon has slammed FIFA's lack of flexibility after the governing body imposed a transfer ban on the club.

This month Real and Atletico Madrid were banned from registering players for the next two complete transfer windows for breaches of regulations "relating to the international transfer and registration of players under the age of 18".

Both clubs are appealing the sanction and Calderon - president from 2006 to 2009 - told Omnisport: "I think FIFA should be more flexible with the interpretation of the rule.

"Almost all the children come here to fulfil a dream, to forget a difficult situation. And here, they can have a hope. During my nine years in Real Madrid, the club has given everything to them in terms of their sport and personal education.

"We take care of them given an opportunity, so maybe there are some cases where Madrid has broken the rules but I think FIFA should manage this matter with more flexibility."

Just over two weeks ago Zinedine Zidane took over as coach following the sacking of Rafael Benitez, the Frenchman assuming control of the first team having previously coached B team Real Madrid Castilla.

On Zidane's appointment, Calderon added: "He doesn't have any experience, just training a year-and-a-half in a third division team.

"He was a great player which gives him a huge advantage to know how to manage these kinds of players, he knows how it is working in a changing room with a lot of stars.

"All the players have worked with him and he has their respect. So he has the chance to get success but he is going to need a bit of luck."