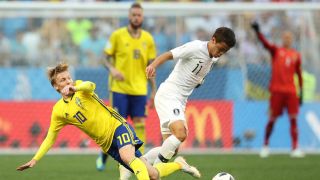 Andreas Granqvist will be heading back to Sweden with Helsingborgs after this World Cup. It looks like he will do so as a hero.

The 33-year-old was the unlikely saviour in their crucial opening World Cup match with South Korea. With certifiable star Emil Forsberg flailing in the limelight when appearing on the biggest stage for the first time, it was his captain who stepped up to the plate – and the penalty spot – to seal three valuable points and put them joint-top in this devilishly tricky Group F.

Not only would neither coach contemplate defeat in this opening game, with Mexico and Germany to come, but the build-up to this match was mired in a peculiar argument over alleged spying. Each side has had to defend themselves in the last few days against various claims of attempted skulduggery, which include an apparently misplaced suggestion Sweden sent a scout to rent a house near South Korea's pre-tournament training camp.

In the first half, you would be forgiven for thinking the spying had not only taken place, but proved hugely successful. The teams matched each other so neatly on the field that 20 minutes went by before the first shot, the second-longest wait in a World Cup game since 1966. Not even Shin Tae-yong's tricks with swapping shirt numbers among his players had the desired confusing effect, and certainly not on Granqvist.

2002 - Andreas Granqvist's goal was the first penalty scored by Sweden at the World Cup since 2002, when Henrik Larsson netted against Nigeria. Slot. June 18, 2018

It's matches like these when teams turn to their creative weapons, to those with the kind of spark that no amount of spying can prepare for. Where Zlatan Ibrahimovic was once that man for Sweden, these days the burden falls on Forsberg, and it's one he does not look comfortable with.

Korea had been expected to man-mark the RB Leipzig winger, but, in truth, there was no need. Playing wide on the left, he managed zero shots on target, zero chances created and the fourth-fewest passes of anyone in a Sweden shirt in the first 45 minutes. Sebastian Larsson had to shepherd him away from the referee after one robust but fair challenge.

His moment to shine came less than five minutes into the second half. Teed up by Viktor Claesson on the edge of the box, he had time to steady himself, turn onto his right foot, and bend the ball into the net. Instead, he sent it somewhere in the region of the 'Jarna Boyz' banner a third of the way up the stand. When he lost possession 12 yards out minutes later, it was hardly a surprise.

So it was that it fell to the captain to deliver. VAR will not lose its critics overnight but it was deployed justly here, allowing referee Joel Aguilar to correct his decision not to penalise Kim Min-woo for a foul on Claesson.

Granqvist had been his side's best player before then and showed no semblance of nerves as he strode up to the spot, sending goalkeeper Jo Hyeon-woo the wrong way and leading the sea of yellow behind the net in the celebrations of their first World Cup goal since 2006.

Granqvist had oddly been an attacking threat throughout, managing three key passes in the first half alone, but it was the tremendous positional play and strength he showed here that will be most important in that huge game against Germany on Saturday.

Based on his performance in Nizhny Novgorod, it's one the reigning champions should be worried about.