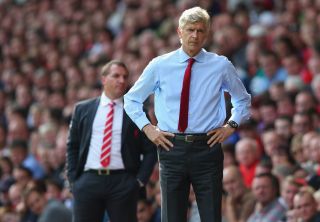 Arsene Wenger's side are top of the table having going eight games unbeaten in the top flight following their opening-day loss to Aston Villa.

But the London outfit have lost their last two home games against Borussia Dortmund in the UEFA Champions League and Chelsea in the League Cup.

Wenger made a host of changes for Tuesday night's 2-0 home defeat to Chelsea as the Frenchman failed to secure his first win over Jose Mourinho.

However, the Arsenal boss insisted the defeat would have no detrimental effect to their league form as they prepare for a stern test against the Merseysiders.

The likes of Wojciech Szczesny, Per Mertesacker, Olivier Giroud and Mesut Ozil are set to be restored to the starting line-up, while Mikel Arteta returns following a one-match suspension.

But Wenger still has several injuries to contend with, with midfielder Mathieu Flamini set to miss out once again adue to a groin problem he sustained in the victory at Crystal Palace last weekend.

Playmaker Philippe Coutinho returns to the Liverpool squad following a spell on the sidelines with a shoulder injury, but boss Brendan Rodgers has a doubt over left-back Jose Enrique (knee).

Liverpool have not lost to Arsenal in the Premier League in their last three visits to the Emirates Stadium and the Anfield club will fancy their chances of avoiding defeat once again as they boast an unbeaten away record in the league this season.

Rodgers' free-scoring side have not lost in their last four games in the top flight, scoring 12 goals in the process.

Luis Suarez has scored six goals in four Premier League outings since returning from suspension and the Uruguay striker has also scored in his last two trips to Arsenal, a club who tried to sign him several times in the close-season.

Suarez and Daniel Sturridge have formed a formidable partnership and the England striker is the leading scorer in the Premier League with eight goals.