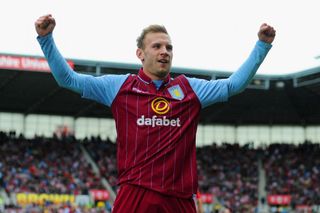 The Austria forward scored the only goal of the game at Stoke City last weekend to ensure Villa made a winning start to their Premier League campaign.

Wiemann helped himself to only five top-flight goals last term, having scored seven in the previous Premier League season, and Villa manager Lambert wants the 23-year-old to find the back of the net on a regular basis.

He told the club's official website "I think Andi has got to add more goals to his game.

"If he does that he will go again. His work-rate is never in doubt and his enthusiasm for the game is second to none.

"Top players will be recognised for their goals. If you can do that, then you have a really top striker on your books.

"The great thing about Andi is I know he can play in the middle or off the front. I know I can play him either side too.

"The competition is getting stronger and stronger - and you've got to step up to that.

"But Andi, since I have been here, has been really, really good."

Villa's opening-day victory owed much to a resolute defensive display, with Ron Vlaar and new signing Philippe Senderos impressive at the heart of the back four and Aly Cissokho - another close-season arrival - also catching the eye, along with the recalled Alan Hutton.

Newcastle did the double over Lambert's men last season and Villa have failed to beat the north-east outfit in the last six meetings between the two sides.

Recent recruit Carlos Sanchez comes into contention to make his Villa debut and fellow midfielder Joe Cole could also make his Premier League bow for the club after recovering from a thigh injury.

Strike duo Christian Benteke (Achilles) and Libor Kozak (broken leg) are not yet ready to return.

A new-look Newcastle side were consigned to a 2-0 home defeat against champions Manchester City in their opening game of the season on Sunday.

Hatem Ben Arfa and Yoan Gouffran were on target in Newcastle's 2-1 win at Villa Park last season and Pardew will be eyeing a repeat performance to get the St James' Park outfit up and running in 2014-15.

Siem de Jong will be in contention after recovering from a calf injury, but Cheick Tiote will not feature due to a hamstring problem.