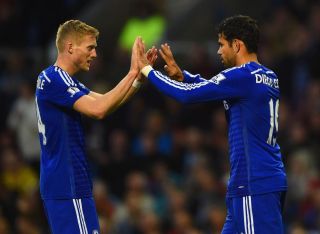 Schurrle, new signing Diego Costa and defender Branislav Ivanovic were on target as Chelsea started their Premier League campaign with a convincing 3-1 victory at Burnley on Monday.

The London club have been installed as favourites to win the title in Mourinho's second season since returning to Stamford Bridge after bringing in the likes of Costa, Cesc Fabregas and Filipe Luis.

Chelsea will be expected to see off another newly promoted side in the form of Leicester at home this weekend to make it two wins out of two in the top flight.

Having triumphed at the World Cup with Germany last month, forward Schurrle is eyeing domestic honours with Chelsea and knows there is room for improvement on a personal level as well as for the team.

"I enjoyed the World Cup a lot, so I got out of that with a lot of confidence," Schurrle told Get West London.

"I came back to Chelsea, and obviously had a very short break. [At Burnley] I think it was a good start for me, but of course we can be better. And when I am 100 per cent fit, there will be more.

"So there's a lot of work for me, but I'm feeling good. I'm enjoying my game, I'm enjoying being on the pitch.

"I think the whole team played well [at Burnley]. We had a lot of control, passes, good combinations. It was a lot of fun on the pitch."

Chelsea have won their last six games in all competitions against Leicester, scoring 13 in the previous three meetings between the two sides.

Ramires comes back into contention after serving a four-match ban and Mourinho must decide whether to make changes or stick with a winning team, as Filipe eyes his first Premier League start.

Didier Drogba can expect another rapturous reception from the Chelsea fans who worshipped him during his first spell with the club, but the striker may have to settle for a place on the bench once again.

Chris Wood's late goal ensured Leicester salvaged a 2-2 draw against Everton in their first game back in the Premier League.

The New Zealand striker was on target four minutes from time in an entertaining clash in which record signing Leonardo Ulloa scored on his debut.

It would be a major surprise if Leicester deny Chelsea all three points, but manager Nigel Pearson was encouraged by the manner in which they thwarted Everton.

Winger Marc Albrighton (groin) and striker Jamie Vardy (thigh) could be in contention to feature at Stamford Bridge, but Danny Drinkwater (hamstring), Matty James (shin) and Matthew Upson (foot) are ruled out.