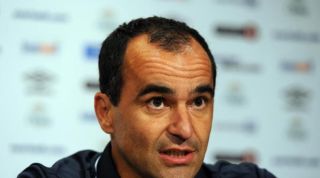 Arsene Wenger's side travel to Merseyside for a Premier League encounter just four days after they were held to a goalless draw by Besiktas in the first leg of their UEFA Champions League play-off tie in Istanbul.

Everton beat Arsenal 3-0 in the Premier League at Goodison Park in April and the London club can expect a stern test in their first away game in the top flight this season.

Martinez is uncertain that his Everton side's chances of pulling off a repeat performance will be enhanced by the fact that their opponents will be playing their third game in the space of a week.

"It depends how you look at it," said the Everton manager.

"I'm looking at Arsenal with the experience and know-how they have and don't think playing on Tuesday is going to affect them negatively.

"If anything, it could be a positive because you can get rid of that rustiness and can get you into a real competitive frame of mind straight away."

Martinez also has mixed feelings over whether playing what could be a rival for a top-four finish so early in the new campaign is a good thing.

He said: "You want to play teams like Arsenal early on in the season when they are not hitting their top potential, but when you see them in Turkey, you see them reaching full levels very quickly, and that could be a negative for us.

"We need to replicate the level of performance from when we faced them at Goodison last season."

Prior to their comfortable victory over the London club at Goodison Park last season, Everton had failed to beat Arsenal in 14 games in all competitions.

The Merseyside outfit were unable to make a winning start to their Premier League campaign last weekend, as newly-promoted Leicester City held them to a 2-2 draw at the King Power Stadium.

Right-back Seamus Coleman could come back into the Everton starting line-up after being restricted to a substitute appearance at Leicester due to a hamstring injury, but Ross Barkley and Bryan Oviedo (both knee) are unavailable.

Arsenal were able to begin their top-flight campaign with a win, but were forced to do it the hard way as Aaron Ramsey's last-gasp goal at the Emirates Stadium secured a 2-1 victory after Crystal Palace had taken the lead.

It has been an eventful start to 2014-15 for Ramsey, who was sent off for the first time in his club career at Besiktas after being shown two yellow cards - a decision that baffled Wenger.

Ramsey will be suspended for the second leg of the clash with the Turkish side on Wednesday, but is eligible to feature against Everton.

Fellow midfielder Mikel Arteta will not play against his former club, though, having sustained an ankle injury at the Ataturk Stadium and so Mathieu Flamini could come into the side.

Wenger revealed he will check whether Per Mertesacker, Mesut Ozil and Lukas Podolski will come into contention this weekend for the first time this season after being given an extended break following Germany's World Cup victory.