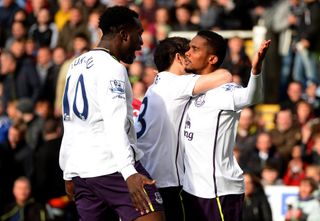 The two former Chelsea strikers have linked up well so far this term, scoring seven league goals between them, helping the Merseyside club recover to ninth after a shaky start.

Lukaku recently hailed the influence that four-time African Player of the Year Eto'o is having on his career and Martinez described the former Cameroon captain as a "gift from the footballing gods" on Thursday.

A former Swansea manager and player, Martinez was also effusive in his praise of Lukaku, who will shake off a knock to once again partner Eto'o at Goodison Park on Saturday.

Martinez said: "Football is a contact sport. He [Lukaku] is getting stronger game by game.

"He's really sharp in front of goal, we need to make sure he peaks physically in the coming weeks."

Eto'o scored twice last weekend as Everton came away from Burnley with a 3-1 win, opening the scoring with an early bullet header before adding gloss with a late curling effort.

Swansea manager Garry Monk pinpointed the experienced attacker as the main threat his side will have to overcome as they seek a response to a midweek defeat at Liverpool in the League Cup.

Monk said: "He's got a proven pedigree, he's played at some of the top clubs in the world.

"The hunger is still there - it's a very good signing."

Martinez led Everton to the double over his former club last season, having failed to beat them in four previous attempts as Wigan Athletic manager.

With an intimate knowledge of what makes things tick at the Liberty Stadium, the Spaniard is remaining on his toes.

He said: "They know what they are, the way they play and have a strong football philosophy. Garry is making sure they are there in every performance they go into.

"Swansea have got really good options all over the park. [Gylfi] Sigurdsson seems to have a good understanding with all the attacking players.

"He and Wilfried Bony are the two players in form but they're not the only two players who carry a threat. We need to be aware of that."

Having racked up seven assists in nine games this term, Sigurdsson will shake off a knock to feature on Saturday, with Ki Sung-yueng also available.

Federico Fernandez can play after having a red card received at Anfield in midweek overturned, but knee injuries continue to keep Leon Britton and Jordi Amat out of action.