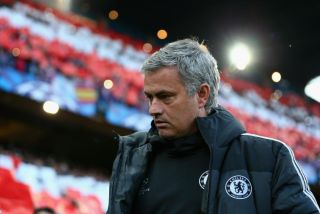 Leaders Liverpool know a 12th consecutive league win would eliminate Jose Mourinho's team, who are five points behind in second with three matches to play, from the title race.

Third-placed Manchester City - who recently lost 3-2 at Anfield - are a point further back, but have a game in hand and will be hoping Brendan Rodgers' men slip up.

Despite Chelsea's need for points, Mourinho has suggested he will rotate his side heavily, with more importance seemingly placed on next week's UEFA Champions League semi-final second leg against Atletico Madrid.

Many have criticised the Chelsea boss for taking his eye off the Premier League, but the Portuguese can take confidence from a positive record in meetings with Liverpool, against whom he has so often been the villain of the piece.

During his first stint at Chelsea, Mourinho developed a rivalry with former Liverpool boss Rafael Benitez as the teams locked horns regularly in domestic and continental competition.

Mourinho has won six and lost just one of eight league clashes against Liverpool, including a 2-1 victory in this season's reverse fixture at Stamford Bridge, and the Chelsea boss does not feel under pressure in his quest for silverware.

"My players are fine," he said. "No (I don't have to win a trophy), we have to work to the maximum of our abilities.

"I'm not really worried, I think match after match. You wait for the rest of the season and see what destiny has for you."

Liverpool's destiny lies firmly in their own hands, with the club having put the mantras of 'one game at a time' and 'we go again' to perfect use in recent weeks.

A first league title since 1990 is now well within reach for Rodgers' side, whose victory over City earlier this month highlighted their ability to perform under pressure.

Ahead of the latest test of Liverpool's credentials, goalkeeper Simon Mignolet is not interested in the speculation over Chelsea's line-up.

"We don't really read too much into that," he told Liverpool's official website.

"It's more about us and about what we have to do, rather than looking at someone else. We have to make sure that we're ready for the game, like we've done so far this season. It doesn't make any difference."

Rodgers could be handed a boost with the potential return of Daniel Sturridge from a hamstring problem.

However, the Liverpool boss has backed his side to perform if the striker remains sidelined, stating on Friday: "We will give it another 24 hours. If he's not fit, we've coped before."

Liverpool will definitely be without the services of the suspended Jordan Henderson, while on-loan attacker Victor Moses cannot face his parent club.