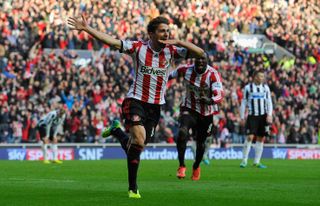 Gus Poyet's first home game in charge of Sunderland in October resulted in a 2-1 victory over their arch-rivals thanks to Fabio Borini's late screamer - a win that marked their first in the Premier League this season.

They will take even greater confidence from last season's corresponding fixture, which resulted in a memorable 3-0 triumph under Paolo Di Canio - their first victory under the Italian, who was sacked after a winless start to the 2013-14 campaign.

The three points on that April day went a long way to helping Sunderland to top-flight survival last season, which is again their main aim this term.

Wednesday's 1-0 win at home to Stoke City lifted Sunderland out of the relegation zone for the first time since the second week of the season, while Newcastle remain eighth, just behind the race for European spots, after a midweek 0-0 draw at Norwich City.

The winger's red-hot form as led to tentative calls for him to make England's FIFA World Cup squad, but Sunderland assistant Charlie Oatway is just happy to have the Middlesbrough academy graduate propelling the Wearsiders up the league table.

"No one's under any illusions about his ability," Oatway said.

"We've managed to get him firing on all cylinders at the moment, we needed that little bit of a bright spark and thankfully it's him."

Further boosting Sunderland's attacking potency is Argentina international striker Ignacio Scocco, who moved to the Stadium of Light from Internacional on Thursday.

The 28-year-old could be in line for a Sunderland bow in the derby, while Luuk de Jong could make his Newcastle debut after moving to Tyneside on loan from Borussia Monchengladbach in the week.

De Jong's arrival came hot on the heels of Yohan Cabaye's £20million departure to Paris Saint-Germain - with the Frenchman's spot in midfield not immediately filled by the St James' Park recruitment team.

Loic Remy is suspended after headbutting Bradley Johnson in Tuesday's draw at Norwich, while Lee Cattermole could be missing for Sunderland after sitting out the Stoke win with a calf injury - though speculation remains that Mark Hughes is hopeful of bringing the midfielder to the Britannia Stadium.