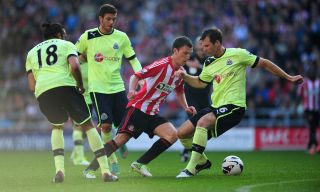 The Uruguayan, who took over from Paolo Di Canio on October 8, watched his new side fall to a disappointing 4-0 defeat at Swansea City last time out.

He will hope for a better performance against Sunderland's bitter rivals, and should take heart from their 3-0 win over Newcastle at St James' Park last season.

Poyet's side will have designs on replicating that result, which also came in Di Canio's second game at the helm.

The former Brighton and Hove Albion boss could have a fully-fit squad to choose from, although defender Wes Brown faces a late fitness test as he recovers from a calf injury.

Sunderland's record against their neighbours is far from spectacular, with their last home win over Newcastle coming in a 2-1 victory in 2008.

Newcastle have already posted two away wins this campaign, overcoming Aston Villa and Cardiff City in what has been a decent start to the new term.

Alan Pardew's side displayed great spirit in last Saturday's 2-2 draw with Liverpool, but it was a result that came at a cost as Mapou Yanga-Mbiwa was sent off for a foul on Luis Suarez.

His subsequent absence leaves the visitors potentially short of depth at the back on Sunday, with captain Fabricio Coloccini (groin) and fellow central defender Steven Taylor (hamstring) both described as "touch and go" for the contest by Pardew.

Long-term absentees Ryan Taylor and Massadio Haidara (both knee) remain on the sidelines.

Newcastle have failed to score in just two games this term, with attacker Loic Remy netting five times since joining on loan from QPR.

And with the likes of Hatem Ben Arfa and Yohan Cabaye - who scored last season's corresponding fixture - also among Newcastle's creative talents, Sunderland will need to be at their best if they are to a keep clean sheet for the first time in 12 home Premier League matches.