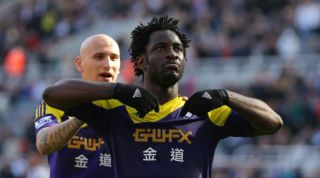 Swansea welcome Aston Villa to the Liberty Stadium having responded to reports of infighting and questionable half-time snacks with a 2-1 win at Newcastle United last week.

Both the hosts and Villa have endured their fair share of controversy in recent weeks, with the suspension of both assistant manager Ian Culverhouse and head of football operations Gary Karsa dominating the headlines coming out of Villa Park a fortnight ago, but Paul Lambert's men played out a goalless draw with Southampton last time out to avoid losing five in a row.

Swansea - six points clear of the relegation zone - will be looking to maintain the momentum generated by last Saturday's victory in the north east and Monk is well aware of the importance of Premier League survival.

"We all know how much the Premier League means to the club," he said. "We worked so hard to get here, and we’ve been here for a little while now, so we want to really establish ourselves.

"We’re not there yet. We have work to do.

"It’s been well over a year since we had back-to-back wins, which is unacceptable if you want to be successful in football, so that is the challenge for us."

The hosts will look to Wilfried Bony - scorer of both goals at Newcastle - to provide inspiration once again this weekend. The Ivorian has found the net 13 times in the Premier League so far - eight more than any other Swansea player.

However, Villa can boast one of the tightest defences on the road this season, conceding just 21 away from home - eight fewer than leaders Liverpool.

That said, they are without a goal in three hours and 20 minutes of Premier League football and have struggled to cope with the absence of top marksman Christian Benteke since he suffered an Achilles injury.

Winger Marc Albrighton is eager to secure an elusive victory as soon as possible, with Villa a point worse off than Saturday's opponents.

"You just have to look at where we are in the table at the moment," he told the club's official website. "We don't want to be there but we are and we have to be responsible and pick up the results to push us up.

"It will be a really tough match. They are right next to us in the table.

"Whoever gets the points on the day will be over the moon. We have to make sure it's us."

The hosts remain without Spanish forward Michu (ankle) and the suspended Chico Flores, while, aside from their long-term absentees, Joe Bennett (ankle) is Villa's only doubt.