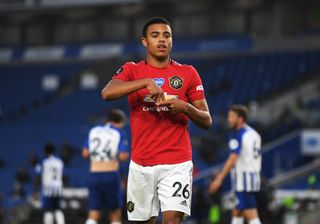 The Premier League fixtures are coming thick and fast, with less than 24 hours between the last kick of gameweek 33+ and the imminent transfer deadline.

To help time-strapped fantasy managers access the wisdom of the crowd, we have calculated which players have seen the most net transfers in each position and price bracket.

Mason Greenwood has attracted attention right from the start of the season as one of the few budget-priced strikers at a big club. As early as gameweek 2 he had over a million owners but his popularity dwindled as his involvement was limited to a series of late cameos from the bench.

The 18-year-old had to wait until December for his first start and didn’t feature in back-to-back starting line-ups until just before the season was suspended.

But now, after three starts in a row and as many goals to his name in that time, managers have come flocking: Greenwood has been brought into more than twice as many teams this week as the next most popular player.

Whether the Bradford-born striker can extend his run to a fourth start against Aston Villa on Thursday remains to be seen, but with such a low price tag there’s very little to be lost by bringing him in.

Another young Englishman who has been the talk of the trading floor is Phil Foden. The Manchester City starlet is the most popular budget midfielder this week after a similar rise to Greenwood’s.

Foden may have watched from the bench for much of the match as City suffered a shock defeat against Southampton, but managers have not forgotten his stellar displays against Burnley and Liverpool.

The former BBC Young Sports Personality of the Year more than doubled his ownership ahead of the last gameweek and was included in a season-high 305,917 squads.

A steady stream of admirers has continued to amass in the lead up to his side’s encounter with Newcastle, and you can see why.

You’d be hard pressed to find another midfielder with as much points potential for the same amount of money.

Trent Alexander-Arnold is the game’s top-scoring defender but also the most expensive. John Lundstram has proved to be season’s low-budget surprise package. Somewhere in between those two price points, Cesar Azpilicueta has been quietly going about his business.

Chelsea’s captain is the most popular addition in defence this week after two double-digit points hauls in the four matches since the restart, but those performances had been coming.

The game’s ICT Index condenses more than 40 statistics to identify the players most likely to score FPL Points.

Azpilicueta is one of only five defenders whose numbers suggest that he should have provided at least three goals and three assists so far this season.