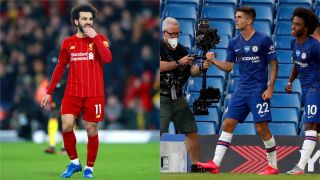 With the Premier League back in full flow, the most successful Fantasy Premier League managers have had ample time to run the rule over the players they were considering for the run-in.

We’ve analysed the squads of more than 250 bosses who have finished in the top 10,000 in at least five previous seasons to see who they’ve transferred in and out the most ahead of the latest deadline.

With a 17.6 percentage-point increase in ownership among elite managers, Manchester United’s Anthony Martial is by far and away this group’s new favourite.

That will largely be down to the Frenchman’s hat-trick against Sheffield United, bagging him a whopping 21 FPL points in the process.

Martial had scored three in five beforehand, and as a striker classified as a midfielder, earns five points per goal instead of four.

Chelsea’s Christian Pulisic is another midfielder who has goals in his locker, and has earned the trust of the best.

The American has notched a goal in each league game since football’s return at seven FPL points per appearance, while the Blues have fixtures against West Ham, Watford, Crystal Palace and Norwich to come.

Finally, Arsenal’s Eddie Nketiah has piqued the elite’s interest, and why not at £4.4m?

Nketiah notched his second Premier League goal of the season against Southampton, and with Gabriel Martinelli injured, is rising in the ranks at the north London club.

With plenty of top managers bringing players in, they must sell others – so who has been cut by the cream of the crop?

Two top Everton players have seen the biggest decreases in ownership, with Dominic Calvert-Lewin and Richarlison feeling the wrath of the elite.

That might seem harsh when considering the Toffees’ recent fixture list, which has included games against Arsenal, Chelsea, Manchester United and Liverpool.

However, with Richarlison for example costing £0.1 more than Martial, better value can clearly be found elsewhere.

Liverpool’s Sadio Mane and Mohamed Salah are perhaps surprises on this list of elite manager castaways, but with the title sewn up, fears over squad rotation may have played a part.

And finally, a blank against Sheffield United seems to have been enough for a smattering of top bosses to sell United’s Bruno Fernandes, despite the midfielder either scoring or assisting in five consecutive games beforehand.

Perhaps the Portuguese is being sold as a makeweight for Martial while his price is still high, having risen from £8.0m to £8.7m since his arrival.