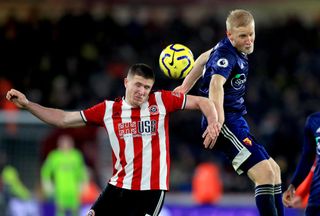 It may be the middle of the extended winter break gameweek, but Fantasy Premier League managers have still been making transfers in their thousands.

And the message is clear: popular picks earlier in the season are being phased out as bosses show there is little room for sentiment towards the business end of the campaign.

So which former favourites should you consider selling ahead of gameweek 27?

Brighton’s Mathew Ryan spent much of the season as a bargain favourite, priced at just £4.5million at the start of the season.

His smattering of clean sheets was enough to keep him in the good books of almost 1.5 million managers, but his ownership has fallen for three weeks in a row now and the slide doesn’t look like stopping.

That’s because Ryan has gone without a clean sheet in six gameweeks, and the fixture list won’t let up.

The Seagulls face Sheffield United, Crystal Palace and Wolves in their next three, before tackling Arsenal, Leicester and Manchester United – perhaps it’s time to look elsewhere for an affordable keeper.

Bargain defenders have been plentiful this season but, for two of them at least, it looks like the FPL population has lost patience.

Sheffield United’s John Lundstram had a dazzling start to the season, but with a lack of minutes in recent games, a declining points return and a blank in GW28, more than 10,000 net sales is the result.

Crystal Palace’s Martin Kelly, meanwhile, represented amazing value at £4.3m, but his ownership has dropped below two million for the first time in a number of weeks.

A calf injury with an unknown return date is almost certainly a factor, while zero goals and just one assist all season mean he isn’t offering attacking bonuses either.

The case for the defence is pretty weak for these two.

Fox on the run

Further up the pitch, Leicester’s James Maddison has gone off the boil, as his side have done.

The England man has a decent return of six goals and five FPL assists this season but has registered only one goal in his last 10.

Furthermore, he has failed to earn more than two FPL points on nine of those last 10 outings – that combined with his £7.5m price tag has led to a net reduction in ownership ahead of GW27.

With Leicester winning just three of their last nine, that probably won’t come as too much of a shock – their star players don’t seem like the reliable FPL buys they did a few months ago.

Not long ago, an FPL front three of Jamie Vardy, Tammy Abraham and Neal Maupay would have seen you rise to the top of your mini-leagues, but a lot can change during a season.

Between them, this trio have 37 league goals this season, while all three are priced under £10m, but a collective goal drought has seen thousands replace them in the market.

Vardy has gone seven gameweeks without a goal, while his injury spooked a few too – Abraham meanwhile has two in 10, while Maupay hasn’t scored since GW16.

There are currently 13 strikers in better form than any of these three according to the FPL – perhaps one of those might be better placed to score goals as your season nears the final straight.