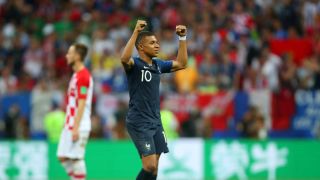 France claimed a wonderful World Cup victory on Sunday with a 4-2 defeat of Croatia in Moscow.

Mario Mandzukic's 18th-minute own goal put Didier Deschamps' men in front only for Ivan Perisic to hammer in a fine equaliser. The Inter player was then harshly adjudged to have handled in the box, as VAR made its first impact upon a World Cup final.

Antoine Griezmann converted his fourth goal of the tournament from 12 yards before Paul Pogba - shortly after a pitch invasion from Russian protest group Pussy Riot interrupted proceedings - and Kylian Mbappe put France out of sight.

Mandzukic pulled one back after a dreadful error from France goalkeeper Hugo Lloris but Croatia could not muster one final effort.

See how the game panned out on social media below: