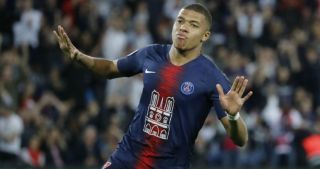 Kylian Mbappe has told Canal Plus that he is committed to Paris Saint-Germain, amid ongoing rumours linking him with a move to Real Madrid.

The France striker has scored 36 goals in all competitions this season, netting a hat-trick against former side Monaco on the day PSG were confirmed as Ligue 1 champions, following Lille's draw with Toulouse.

"It's good for Real Madrid if there is Zizou, but I will watch merely as an admirer."

With the hat-trick, Mbappe became the first Ligue 1 player since Jean-Pierre Papin in 1989-90 to score 30 league goals.