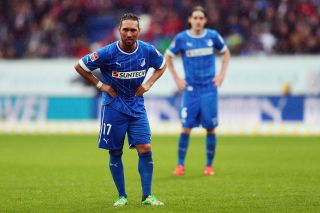 Weis has signed for the rest of the season on loan from Bundesliga rivals Hoffenheim, with Frankfurt including the option to sign him permanently at the end of the campaign.

Madlung, capped twice by Germany, has signed on an 18-month deal, having spent the first half of the season without a club following his release by Wolfsburg.

"We're delighted to have been able to sign another player in Tobias Weis," said Frankfurt's sporting director Bruno Hubner.

"He can play in a variety of positions across the midfield and that makes him another alternative for us."

Both players have joined Frankfurt on their mid-season training camp in Qatar and will hope to make their bows when Frankfurt get their campaign back under way at home to Hertha Berlin on January 25.