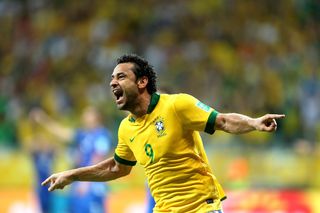 The former Lyon forward, now back in his homeland with Fluminense, has told FourFourTwo that a desire to be with his daughter dictated the return to South America, rather than move to White Hart Lane and earn more money.

The decision has paid off in a different sense for the 29-year-old. He has since netted 110 goals in 175 games for the Rio de Janeiro outfit, winning Campeonato Brasileiro Serie A titles in 2010 and 2012 and the league's MVP award in 2012.

Speaking exclusively in the November 2013 issue of FourFourTwo, Fred says: "Before signing for Fluminense [in 2009] I had an offer from Tottenham. My brother, who is also my agent, had even agreed numbers with them, but at that time I wanted to go to Brazil to be closer to my daughter.

"From a professional perspective Tottenham were more interesting, but I decided to come back, even for a lower salary. It was my decision, and it was worth it."

His free-scoring form has resulted in a recall to the national setup, where he has excelled. Fred had scored seven goals for his country between 2005-12. He has now netted nine goals for Brazil in 2013 alone, including home and away against England and five times in the Selecao's 2013 Confederations Cup triumph.

"My personal, professional and spiritual sides are balanced and everything is going well. I see five more years of football at the highest level ahead of me."

Read the full interview with Fred in the November 2013 issue of FourFourTwo, featuring our must-read chat with Chelsea manager Jose Mourinho and interview with Manchester United new boy Marouane Fellani. We grill Dutch legend Ronald Koeman, plus read what the world's former most expensive players had to say about their big-money moves. Subscribe, in print or for iPad, now. You know it makes sense.